In early November, the Reserve Bank voted to retain the official cash rate at 1.5%, the fourth month in a row that this figure has been maintained. Concerns over the performance of the economy, particularly in the mining sector, has encouraged them to keep rates low with the result that home owners and buyers are enjoying record levels of financing affordability rarely seen before. As always there is speculation as to when this rate will move, and smart borrowers will want to keep an eye on options for fixing their rate ahead of any changes in the foreseeable future.

November also saw the U.S. election finally happen with a Trump victory seen as positive by the capital markets. The Australian share market rose from a low of 5156 during the election to 5440 at the end of the month. The strength of the Australian stock market over the last year has begun to impact bank interest rates as investors remove cash to invest elsewhere. With their cheaper source of funding starting to dry up banks have already begun to move on their fixed interest rate deals and there is an expectation that this will continue regardless of whether the RBA increase rates or not. Banks have shown a willingness, on more than one occasion, to make their rate decisions independently of the Reserve Banks rate.

Signs of slowing in the Melbourne property market appeared in November with the Core Logic Home Property Index showing it to be the first east coast city to have a drop in market growth. 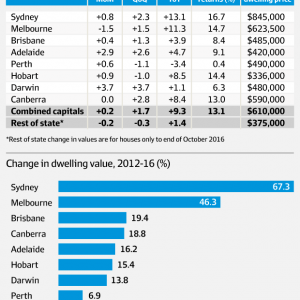 Melbourne’s drop was headed by a decline in apartment prices where an over-supply in the market appears to be slowing the rising prices seen before. Sydney continued to surge ahead with strong growth. Both cities still showed buoyant house prices over the last twelve months with growth in excess of 14%.

Elsewhere Brisbane and Perth showed a low positive return. Perth may be turning a corner however it is still feeling the effects of the mining sector slowdown with year on year house prices showing a 3.4% decline.

The strongest performers in November were Adelaide and Darwin, with 2.9% and 3.7% growth from the previous month. Both cities reflected the trend that a property boom often starts in the larger centres before spreading out to the smaller cities.

The increase in apartment supply across major cities, particularly Brisbane and Melbourne, is anticipated to slow growth in these markets in the short term, but it is expected that most of this supply will be soaked up in the next two years leading to increased demand in the apartment market again from 2018. It may well represent a good time to enter this sector.

Although growth has occurred over the last four years across all cities, Sydney and Melbourne have been the standout performers during this time.

With property prices looking to head into a holding pattern in some cities, and mortgage rates potentially on the rise, now could be a good time to secure a fixed rate on your mortgage. Talk to our team today about the rates that are currently available and how you could refinance to lock them in.

Why Do You Really Need a Mortgage Broker?

Proof that Property is a Relatively Safe Investment 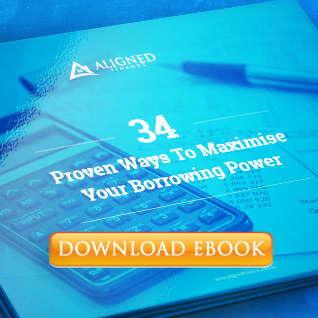